RSS
← Where does the light go when I turn all the lights off and close the curtains?
Why do we get that weird falling sensation at the top of the stairs when there aren’t any more steps? →

Why do some people have a phobia of feet? 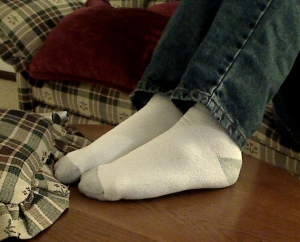 Most phobias fall into two categories:  Fear from experience or fear from instinct.  The ones brought about by a single event or association are the simplest to work out.  Watched Stephen King’s ‘IT’ as a kid?  Clowns are terrifying.  Had a big spider thrown at you one Halloween?  Spiders are terrifying.   It’s easy.

Some of the instinctive ones are simple too.  Heights, snakes, sudden loud noises; these are all  survival tactics.

The roots of this one go back quite a bit further than the obvious caveman hunt/gather/kill-things-with-teeth instinct we have all been taught.  Humans have changed a great deal over the last few billion years.  What we don’t really consider is that humans are still, even now, changing and adapting.

Can you do that lip curl thing like Elvis used to?  Can you do it on both sides, or just one?  Uh-huh.  The ability to do that relies on a muscle called the vibrissal capsular muscles, or Sinus hair muscles, which would have originally been used to wiggle our whiskers….  Except now the whiskers have gone, the muscle is mostly useless, and it is slowly being phased out of the human machine.  Roughly 35% of people are now actually born without it, and doomed to fail as Elvis impersonators.

Similarly there is a muscle in the foot/leg called the plantar muscle.  It consists of a tendon and muscle that runs from the knee, down the leg and into the ankle joint, but the muscle is so far reduced in size and strength that it does little for our ability to flex and is generally considered redundant.  It is simply not present in about 7-10% of the population.  Any remaining tendon is used as a source for grafts as it does nothing else.

So what traits are humans developing?

In the modern world, we don’t really need much help staying at the top of the food chain.  Any significant changes are generally pegged as deformities, and the subtle ones we pay no mind to.  People are getting taller – take a look at the Victorian beds in stately homes and that much is obvious.  Even in my lifetime I can recall women’s shoe sizes on the high street increasing – larger than a size 7 was unheard of but now you can find up to 9 as standard.

On the other end of the scale, 1 in 2000-3000 babies have some form of webbed fingers or toes.  This is known as ‘syndactyly’ and it is the most common ‘malformation’ on the planet.  Studies suggest that it is becoming even more common as time goes on.  And although this seems useless to us now, as global warming slowly causes the sea level to rise, adaptations such as streamlining and webbing make a little more sense in the long run, don’t they?

The point of all of this is that our instincts are based on a certain sense of self-awareness.  We instinctively curl up in the foetal position to protect our internal organs.  We instinctively put our hands forward when we fall to prevent faceplanting.  And when you look at others you have a sense of what a standard human should look like.  You can tell if a person’s eyes are wonky, or the limbs are the wrong proportion, and it doesn’t feel correct somehow.  So how would you feel if you woke up with webbed fingers?  It might be correct, but not at this point in our evolution.  It would feel wrong and gross.  What, then, if your instincts come from too far back in the evolutionary cycle?  What if your sense of ‘rightness’ does not link up with what is there?  People who are afraid of feet may have leftover instincts from a time when feet were not normal.  They may feel uncomfortable with clicking knuckles or bones, for similar reasons.  This is not by any means specific to feet; in fact it is an under-reported phenomenon and may be an underlying factor among those with wider body dysmorphic issues in general.

← Where does the light go when I turn all the lights off and close the curtains?
Why do we get that weird falling sensation at the top of the stairs when there aren’t any more steps? →

One response to “Why do some people have a phobia of feet?”